Allah and Bible Translation Again: New Light from an Ancient Manuscript As expected, the hearing of the application by the Sidang Injil Borneo (Borneo Evangelical Church) Sabah for leave to sue the government over the right Christians to use the word “Allah” was adjourned to 7 Aug. It is most interesting that it is the … END_OF_DOCUMENT_TOKEN_TO_BE_REPLACED

As expected, the hearing of the application by the Sidang Injil Borneo (Borneo Evangelical Church) Sabah for leave to sue the government over the right Christians to use the word “Allah” was adjourned to 7 Aug.

It is most interesting that it is the government officials who keep asking for postponement of the court hearing. I think the government knows that its policy of banning the use of the word ‘Allah’ by non-Muslims is just intellectually untenable, legally indefensible and morally embarrassing. Hence, it resorts to asking for postponement of both the SIB case and the Catholic Herald case on grounds of legal technicalities.

Meanwhile the authorities are trying to muddle the issue by bringing in third parties. The Federal Territory Islamic Council (MAIWP) and the Perak Islamic Religious and Malay Customs Council (MAIAMP) have applied to intervene in the Herald court case. Not surprisingly, an official from the Islamic Council asserted that “the High Court does not have jurisdiction to hear matters which fall under the Syariah Court’s jurisdiction, which includes matters pertaining to Islam.” Presumably, the High Court should transfer the hearing to the Syariah Court!

This seems like a good time to offer more reference materials to supplement the materials I gave earlier to demonstrate the dubious rationale behind the Muslim officials’ attempt to monopolize or copy right the word ‘Allah.’

You may refer to my earlier articles:

No one Religion can Monopolize or Copyright the Term ‘Allah’

‘Allah’ is for all Malay Speaking People in Nusantara

The Semantics of the word ‘Allah’

New materials section 1
First, on pre-Islamic usage of Allah and the customary usage of Allah by Arabic speaking believers from Islam and Christianity:

I refer to Kenneth J. Thomas, “Allah in Translations of the Bible,” Technical Papers from the Bible Translator 52, no.3 (July 2001), the official journal of the United Bible Society.

“ …the Arabs used the word Allah for the supreme being before the time of Muhammad. /4/ Inscriptions with Allah have been discovered in Northern and Southern Arabia from as early as the fifth century b.c. /5/ Christians have used the word Allah from pre-Islamic times, and Allah has been used continuously in Arabic translations of the Bible from the earliest known versions in the eighth century to this day. One Arabic translation of the New Testament using the word may even be pre-Islamic.”/6/

Jews, Christians, and Muslims have used Allah in their citations and translations of the Bible since the first centuries of Islam. Jewish commentators writing in Arabic used Allah in their translations and citations. Sa´adiah Ga`on b. Joseph, a 9th-10th century a.d. Rabbanite translator of the Hebrew into Arabic (using Hebrew characters), used Allah for elohim. For example, for Genesis 1:4 he has: “And Allah saw that the light was good.” /7/ This practice of Sa´adiah was followed by the Karaites, a Jewish sect in Jerusalem, in the 10th century. /8/ An acquaintance of St. John of Damascus, Abu Qurah, the Bishop of Haran in the 8th-9th century a.d., uses Allah to translate theos in his citations of the Bible in Arabic. For example, in John 1:1 he has “the Word was with Allah.” /9/ A number of Muslim writers in the 9th century a.d. used Allah in their citations of the Bible. Al-Tabari, quoting the words of Jesus in John 10:36, has “Allah sent me into the world” and, quoting the words of the devil inMatthew 4:3, has: “If you are the son of Allah . . .”/10/ Another Muslim writer, Ibn Qutayba al-Dinawari of Baghdad, quotes Jesus as saying in Matthew 6:24, “You cannot serve both Allah and Mammon.” /11/ A Shi´ite Muslim scholar of the 9th century, Al-Ya´qubi cites the answer of Jesus to the devil in Matthew 4:7, “Do not test Allah your Lord.”/12/Thus, from the beginning of contacts between Jews, Christians, and Muslims there was use of Allah that enabled them to enter into common discussion about biblical content and to dialogue with one another….

The use of the same word for the supreme being by people of various religions need not mean that they all have the same views about deity. Each religion defines the meaning of the supreme being according to its own convictions. Those of different religions who use the word “Allah” understand the nature of the supreme being to which it refers according to the beliefs of their own traditions. English speakers can understand this reality by reference to their own usage patterns. Allah is the equivalent to the English word “God” with a capital “G”. Michel observed that “Just as ‘God’ is the name in English for the one divine being who alone is to be worshipped and obeyed, used by Muslims, Christians and Jews, so God’s name in Arabic and those languages who derive their religious terminology from Arabic (like Bahasa, Indonesia) is ‘Allah.’” /22/ Many Muslims have recognized the equivalency of these words as generic terms when writing in English by using the English term “God.”

A prominent Arab Christian writes that “for more than five hundred years before Muhammad, the vast majority of Jews and Christians inArabiacalled God by the name Allah. How, then, can we say that Allah is an invalid name for God? And what about the 10 to 12 million Arab Christians today? They have been calling God ‘Allah’ in their Bibles, hymns, poems, writings, and worship for over nineteen centuries. What an insult to them when we tell them not to use this word Allah!”/23/

When those whose mother tongue is Arabic and who live among Muslims have no problem with the name Allah being used for God in the Bible, this raises a question about what possible problem there might be with the use of Allah elsewhere in the translation of the Bible. It would seem that those who object to its use do so in order to maintain a radical distinction between the Christian and Islamic concepts of the supreme being. Precedence indicates that each faith community has clearly defined its distinctive understanding of Allah through its contextual use, teaching and tradition.

New materials section 2
Codex 151 – Earliest Arabic Biblical Text?
Second, I refer readers to what is possibly the oldest biblical Arabic manuscript (Codex 151). I cite the judgment of Bruce Metzger, one of the most outstanding scholars of textual criticism of our time, “What appears to be the oldest dated copy of the Arabic Acts of the Apostles, and the Catholic Epistles, is cod. Sinai arab, 151. Written in A.D. 867 in what Atiya describes as a ‘rubricate transitional hand between Naskh and Kufic, the codex contains many annotations in the margin which provide exegetical comments on the the Scripture text. The text of Romans, 1 and 2 Corinthians, and Philippians, along with the annotations, has been edited, with an English translation, by Harvey Staal” (The Early Versions of the New Testament: Their Origin, Transmission, and Limitations Oxford University Press, USA (September 15, 1977), p. 261.

Shirley W. Madany offers the following observations: “The original manuscript was completed in Damascus, Syria, 1,000 years before the famous Smith-Van Dyck Arabic Bible appeared in Beirut. It consists of all the Pauline Epistles, plus the book of Acts and the General Epistles. The Gospels evidently were done also but in a separate book. This manuscript volume is missing and may be lost forever.”

“Who was this Bishr Ibn Al Sirri? He was a Nestorian Christian living in Damascus whose work was done about 200 years after the Arab conquest of the Middle East. It is fascinating, therefore, to notice the vocabulary chosen at that period of time by this Christian Arab.”

“Al Sirri chose to start translating with the epistle to the Romans (the starting point in missions to Muslims, as far as Rev. Bassam Madany is concerned). He also used language which would be easily understood by the Muslim, both then and now. This meant that the Christian Arab community had not yet become ghettoized.”

Source: http://www.arabicbible.com/bible/codex151_article.htm
Given below are some photos of this ancient manuscript: 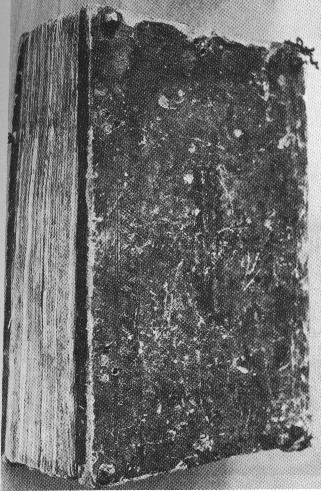 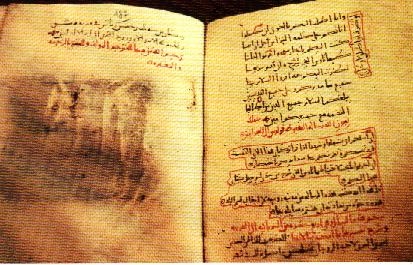 The photo shows the book of Hebrews 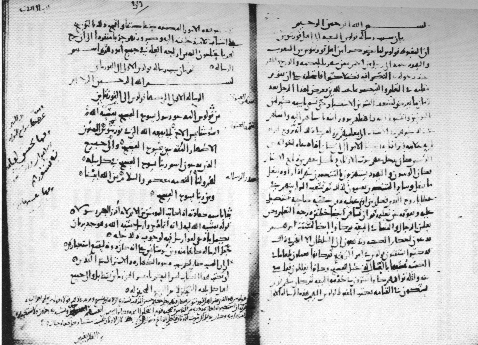 The codex begins with the inscription “In the Name of Allah, the Merciful and Compassionate” (note the first line which says bismillah al rahman al rahim!!). This seems to parallel the practice of Quranic script writers. A similar form is evident at the beginning of three books of this manuscript (Acts, Romans and 2 Corinthians) which read, “in the name of the Father, Son and Holy Spirit.”

Further discussion of the codex can be found in
Sebastian Brock, “A Neglected Wtiness to the East Syriac New Testament Commentary Tradition:Sinak”, Arabic Mz 151 found in Studies on the Christian Arabic Heritage: In Honour of Father Prof. Dr. Samir Khalil Samir S.I. at the Occasion of His Sixty-Fifth Birthday edited by Rifaat Y. Ebied & Herman Teule (David Brown 2005), pp. 205-216.

5 thoughts on “Allah and Bible Translation Again: New Light from an Ancient Manuscript”