Olson is being simplistic and tendentious when he asserts that for Calvinists “motives are not self-determined but given to persons by someone or something.” END_OF_DOCUMENT_TOKEN_TO_BE_REPLACED

In my earlier post, Problematic Methodological Premises of “Calvin against Calvinists” Scholarship, I noted that Calvin placed providence and predestination together in book 3 of the Institutes of 1539. Calvin’s decision arose from his preaching and pedagogical interests, as evidenced by his French Catechism (1537), but he was probably influenced by Paul’s teaching of the “ordo salutis”. Richard Muller explains: “In the 1539 Institutes, Calvin shifted the credal discussion forward and placed a revised order of repentance, justification, the testaments, and predestination (now juxtaposed with providence) after his exposition of the creed—and the best explanation for this arrangement remains his accommodation to the Pauline ordo modeled on Melanchthon.” [Richard Muller, The Unaccommodated Calvin (Oxford UP, 2000), p. 136] However, in the final edition of the Institutes (1559), Calvin separated providence from predestination by moving providence to book 1 while leaving predestination as it was in book 3. END_OF_DOCUMENT_TOKEN_TO_BE_REPLACED However, while the orientations of the two theological approaches are different, they are not mutually exclusive. Neither are they homogeneous systems. Indeed, the intellectual currents of the Reformation era were diverse and complex. Recent scholarship exemplified by the eminent historian Heiko Oberman has brought into question the now superseded view that Reformation thought is sharply discontinuous with medieval scholasticism. A balance reading of the historical sources would give due recognition to the issues of continuity and discontinuity in development of Reformation thought. Without doubt, a new appraisal of the questionable premises of the “Calvin against Calvinists” scholarship is in order. END_OF_DOCUMENT_TOKEN_TO_BE_REPLACED Calvinists are puzzled when critics charge them of relying more on philosophy than on biblical revelation. How can Calvinists be guilty of subordinating the bible to philosophy when they defend tenaciously two propositions which many philosophers instinctively regard as logically incompatible with one another – that God’s choice in predestination is unconditional but man is still held responsible for his decisions – because the bible says so. Obviously, Calvin’s conception of predestination is not defined within the limits of human rationality; in fact his doctrine is offensive to reason. END_OF_DOCUMENT_TOKEN_TO_BE_REPLACED 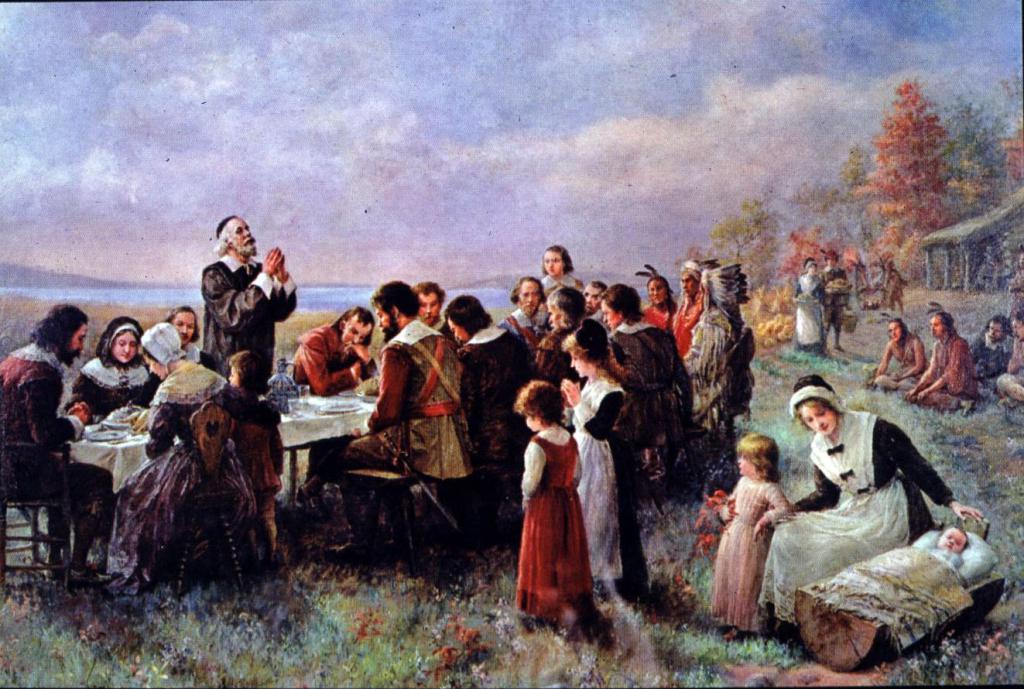 As the full implications of Calvin’s social theology unfolded in later historical developments, the perception of Calvin changed: Calvin the social conservative and an enemy of social freedom became Calvin the constructive reformer. /1/ Michael Walzer goes further to characterize Calvin not as a theologian but as an ideologist. First, Calvin developed a new radical psychology which transforms traditionally passive private citizens into activists who saw themselves as divine instruments for social transformation. Walzer refers to the Calvinist puritans as the earliest form of political radicals who developed his social vision into a revolutionary ideology. /2/ Walzer elaborates, “Calvinism taught previously passive men the styles and methods of political activity and enabled them successfully to claim participation in that ongoing system of political action that is the modern state.” END_OF_DOCUMENT_TOKEN_TO_BE_REPLACED 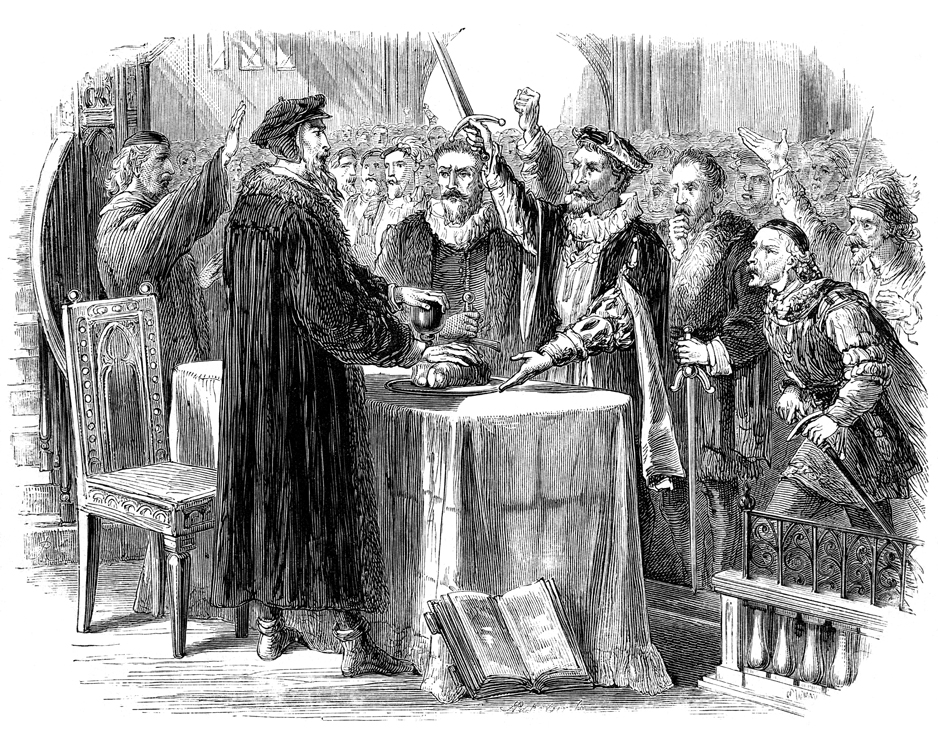 Calvin Refusing The Lord’s Supper To The Libertines, In St. peter’s cathedral, Geneva.

Inevitably, tension can arise between the church and the civil order, especially when kings and magistrates abuse their power and the state poses obstacles to genuine holiness. How should the church respond? Should the church meekly comply, or engage in passive resistance or even actively rebel to overthrow an oppressive government? In response to such tension, Calvin’s political realism is evident.

But it is the example of all ages that some princes are careless about all those things to which they ought to have given heed, and, far from all care, lazily take their pleasure. Others, intent upon their own business, put up for sales laws, privileges, judgments, and letters of favor. Others drain the common people of their money, and afterward lavish it on insane largesse. Still others exercise sheer robbery, plundering houses, raping virgins and matrons, and slaughtering the innocent. Consequently, many cannot be persuaded that they ought to recognize these as princes and to obey their authority as far as possible. (Inst. 4.20.4)

Matters become worse when magistrates who are regarded as guardians of peace, protectors of righteousness and avengers of the innocence and who are appointed as minsters of God “to praise the good, and punish the evil regarded fail their duty to praise the good and punish the evil (1 Peter 2:14 Vg). Thus, they also do not recognize as ruler him whose dignity and authority Scripture commends to us. Indeed, this inborn feeling has always been in the minds of men to hate and curse tyrants as much as to love and venerate lawful kings.” (Inst. 4.20.4) END_OF_DOCUMENT_TOKEN_TO_BE_REPLACED

[At the heart of Calvin’s insight is his insistence that social life needs to be regulated by a social apparatus. Religious values are best maintained and transmitted through social institutions] Calvin upholds both the individual and society. He reminds Christians that they participate in the reign of Christ not as isolated individuals but as a … END_OF_DOCUMENT_TOKEN_TO_BE_REPLACED

[At the heart of Calvin’s insight is his insistence that social life needs to be regulated by a social apparatus. Religious values are best maintained and transmitted through social institutions]

Calvin upholds both the individual and society. He reminds Christians that they participate in the reign of Christ not as isolated individuals but as a new community in which the members mutually nourish one another’s faith with the variety of gifts they have received:

It is as if one said that the saints are gathered into the society of Christ on the principle that whatever benefits God confers upon them, they should in turn share with one another…it is truly convinced that God is the common Father of all and Christ the common Head, and being united in brotherly love, they cannot but share their benefits with one another. (Inst. 4.1.3).

It may be noted that Calvin’s concern remains within the framework of the orders that God has ordained for the human community. Thus, in contrast to much of contemporary Protestant individualism, Calvin constantly reminds his readers that reconciliation with God is inconceivable apart from the closest bonds of fellowship with the other members of Christ’s body: “For if we are split into different bodies, we also break away from Him. To glory in His name in the midst of disagreements and parties is to tear Him in pieces…For He reigns in our midst only when He is the means of binding us together in an inviolable union” (Commentary I Corinthians 1:13). END_OF_DOCUMENT_TOKEN_TO_BE_REPLACED

John Calvin can come across as a severe person because of his austere lifestyle and his zeal in defending doctrine and promoting discipline and godliness in church. Calvin literally worked himself to death. Calvin with his serious demeanor could never match the charms of Luther with his wit and gaiety. However, it is slanderous when … END_OF_DOCUMENT_TOKEN_TO_BE_REPLACED 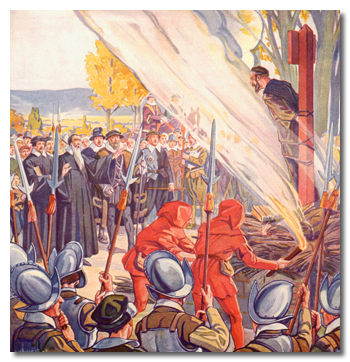 John Calvin can come across as a severe person because of his austere lifestyle and his zeal in defending doctrine and promoting discipline and godliness in church. Calvin literally worked himself to death. Calvin with his serious demeanor could never match the charms of Luther with his wit and gaiety. However, it is slanderous when his adversaries portrayed him as the cold, calculating and brutal tyrant of Geneva. It is hoped that the following cameos taken from Calvin’s life would dispel the mischievous charges of his adversaries.

1) In reality Calvin was a meek and shy person who only wanted to live as a quiet and obscure scholar. He reluctantly joined the Reformation only after he was ‘blackmailed’ by William Farel who threatened him with a curse. When Farel found out that Calvin was planning to go to Strasbourg to study in privacy in some obscure place, END_OF_DOCUMENT_TOKEN_TO_BE_REPLACED

John Calvin Speaking at the Council of Geneva 1549 A Maligned Social Reformer John Calvin’s theology was forged in the cauldron of social conflict. Although Calvin as an exile in Geneva would have cherished his new found freedom from the tyranny of the king of France and from deadly attacks launched by militant Catholics, no … END_OF_DOCUMENT_TOKEN_TO_BE_REPLACED

A Maligned Social Reformer
John Calvin’s theology was forged in the cauldron of social conflict. Although Calvin as an exile in Geneva would have cherished his new found freedom from the tyranny of the king of France and from deadly attacks launched by militant Catholics, no one can downplay the trauma of his social dislocation after fleeing from France. For Calvin, theological reflection in exile became a desperate intellectual mechanism to secure a sense of harmony and well-being for one who was now a stranger in a strange land. Calvin’s plight was exacerbated by the fact that Geneva, his new ‘home,’ was a city of contentious factions competing for power as the city groped for ways to maintain order and security after breaking away from the Duke of Savoy in 1535. One may say that for both Calvin as an alienated exile and for the Genevans, finding the right balance between their precious freedom and preserving their precarious social order assumed an existential intensity.

Calvin had to contend with Genevan citizens who jealously guarded their newfound freedom (the Libertines) and resolutely rejected any semblance of social regulation which they regarded as a regress to the old oppressive order. He forcefully opposed the Anabaptists to prevent irresponsible libertarianism which would result in lawlessness and endless disputes. Finally, Calvin had running battles with the civil authorities of Geneva – the elected Council and its liaison committee working with the pastors (the Consistory) – to limit the jurisdiction of civil authorities in the ordering of church life. END_OF_DOCUMENT_TOKEN_TO_BE_REPLACED