Muslim scholars bypass the historical record with an appeal to the Quranic revelation: END_OF_DOCUMENT_TOKEN_TO_BE_REPLACED PUTRAJAYA: A nine-member bench of the Federal Court today unanimously declared that it is unconstitutional for the Selangor legislative assembly to pass a provision to confer judicial review power to the Shariah High Court in the state.

Chief Justice Tengku Maimun Tuan Mat said Section 66A of the Administration of the Religion of Islam (State of Selangor) Enactment 2003, as it stands, is also unconstitutional.

“I find Section 66A, as it stands, is unconstitutional and void as it is a provision the legislative assembly has no power to make,” she said of the unanimous ruling.

As such, she said, the petition filed by SIS Forum Malaysia is allowed and the declaration is granted, pursuant to the Courts of Judicature Act.

SIS filed the application in the Federal Court on Jan 21, 2020 after the High Court in Kuala Lumpur dismissed its judicial review application against the Selangor religious authority’s fatwa labelling the group “deviant”. END_OF_DOCUMENT_TOKEN_TO_BE_REPLACED The court also awarded RM30,000 as costs to the mother. END_OF_DOCUMENT_TOKEN_TO_BE_REPLACED

On 17 April 2021, Uthaya Sankar criticized Dewan Bahasa dan Pustaka (DBP) for restricting the word “Tuhan” to Islamic usage. He observes that for DBP, “Tuhan” seems to refer exclusively to Allah, whereas “tuhan” refers to “something worshipped by people whose religion or belief is not based on the One God” (“sesuatu yang dipuja oleh golongan manusia yang agama atau kepercayaan mereka tidak berasaskan kepercayaan kepada Tuhan Yang Esa”). [Re: Apart from Allah, why is the word “Tuhan” exclusive for Muslims too?]

However, DBP defends its decision. END_OF_DOCUMENT_TOKEN_TO_BE_REPLACED END_OF_DOCUMENT_TOKEN_TO_BE_REPLACED

KUALA LUMPUR, March 10 ― The High Court today ruled that the Malaysian government’s directive issued in 1986 with a total ban on the use of the word “Allah” in Christian publications is unconstitutional and invalid, and also declared orders to affirm Sarawakian Bumiputera Christian Jill Ireland Lawrence Bill’s right to not be discriminated against and practise her faith.

Justice Datuk Nor Bee Ariffin, who has since been elevated to be a Court of Appeal judge, granted three of the specific constitutional reliefs sought by the Sarawakian native of the Melanau tribe.

The three orders granted by the judge include a declaration that it is Jill Ireland’s constitutional right under the Federal Constitution’s Article 3, 8, 11 and 12 to import the publications in exercise of her rights to practise religion and right to education.

The other two declarations granted by the judge today are that a declaration under Article 8 that Jill Ireland is guaranteed equality of all persons before the law and is protected from discrimination against citizens on the grounds of religion in the administration of the law ― specifically the Printing Presses and Publications Act 1984 and Customs Act 1967), and a declaration that government directive issued by the Home Ministry’s publication control’s division via a circular dated December 5, 1986 is unlawful and unconstitutional.

The order today means that the government’s long-standing absolute ban in the 1986 circular on the use of the word “Allah” in Christian publications in Malaysia has been declared invalid by the court. END_OF_DOCUMENT_TOKEN_TO_BE_REPLACED

The dispute between the Sabah-Sarawak churches and the government over the rights of Christians to use the “Allah” word in the Bahasa Malaysia Bible (Alkitab) has lasted more than 10 years. The Malaysian church leaders continue to reach out to government officials to find an amicable solution even as they await the judgment of the court in two cases where Sarawak and Sabah Christians sued the government for their right to use the word in the Alkitab.

The dispute has lasted so long that it no longer garners attention as front-page news. Not surprisingly, many young Christian leaders today fail to understand the fundamental concerns that compelled the church leaders to bring the dispute to court – the dispute over the “Allah” word would not have arisen if the Malaysian authorities acknowledge the undeniable historical fact that Christians in Malaysia who use the word are merely following the honorable tradition of Arabic Christians who have been using the word for centuries long before the advent of Islam. By prohibiting Christians from addressing their God as “Allah”, the Malaysian authorities are violating common sense and human courtesy.

Young Christian leaders will gain a full understanding of the right of Christians to use the “Allah” word after reading the Expert Report shared in this post. Such an understand is vital so that they will continue defend with firm conviction the right of Malaysian Christians to use “Allah” word in the Alkitab since the usage is historically legitimate, linguistically and theologically well-founded. END_OF_DOCUMENT_TOKEN_TO_BE_REPLACED

Recently, some Muslims were seen wearing T-shirts bearing an eye-catching caption, “I am a Muslim and I follow Jesus. Ask me why?” There were engaging street dawah near Jalan Bukit Bintang, Kuala Lumpur. To make good their claim, they handed out Qurans as well as the book, Jesus: Man, Messenger, Messiah written by Abu Zakariya. … END_OF_DOCUMENT_TOKEN_TO_BE_REPLACED 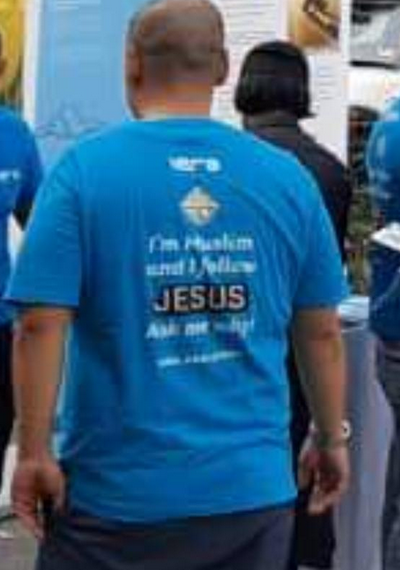 Recently, some Muslims were seen wearing T-shirts bearing an eye-catching caption, “I am a Muslim and I follow Jesus. Ask me why?” There were engaging street dawah near Jalan Bukit Bintang, Kuala Lumpur. To make good their claim, they handed out Qurans as well as the book, Jesus: Man, Messenger, Messiah written by Abu Zakariya. 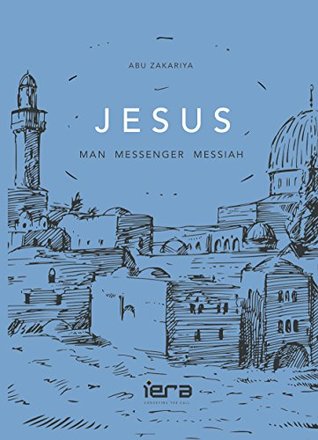 The book is published by IERA (Islamic Education and Research Academy, UK), an Islamic dawah group founded by Abdur Raheem Green. This street dawah is part of their missionary initiative which included an exhibition, “Jesus – Son of Mary Exhibition held on 26 Feb 2018 at the  Selangor Golf Club, Petaling Jaya. END_OF_DOCUMENT_TOKEN_TO_BE_REPLACED

*This article was published originally in The Malaysian Insight (25/11/2017): Translating the Malay Bible: CLJ Needs to Get the Historical Facts Right! Image Above: Ruyls-Dutch-Malay-Bible 17C Image Above: Gospel of John Shellabear Bible Originally Printed 1912 (Image from 1949 reprint) Recently, Concerned Lawyers for Justice (CLJ) argued that the Christian community should work closely with … END_OF_DOCUMENT_TOKEN_TO_BE_REPLACED

*This article was published originally in The Malaysian Insight (25/11/2017): Translating the Malay Bible: CLJ Needs to Get the Historical Facts Right! 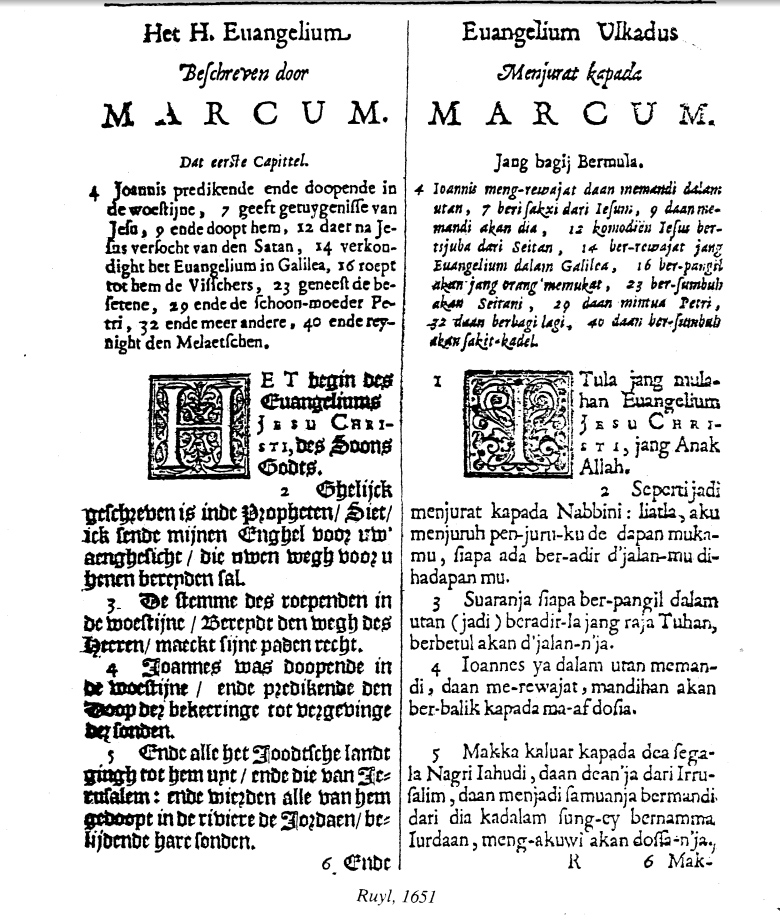 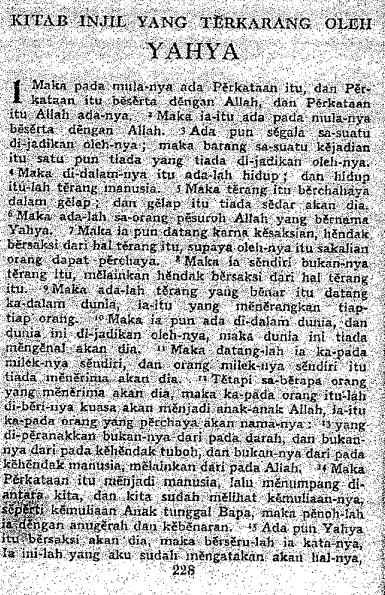 Recently, Concerned Lawyers for Justice (CLJ) argued that the Christian community should work closely with Dewan Bahasa & Pustaka (DBP) to correct purported errors in the current translation of the Malay Bible. Suggestions to improve existing translations of the Bible is in line with the ethos of the Christian enterprise of Bible translation which is an ongoing exercise undertaken by Bible societies all over the world.

However, CLJ’s proposal to allow DBP to prepare an authoritative translation of the Malay Bible is unacceptable. The reason is because given the terms and conditions for DBP’s involvement, the proposal amounts to an illegitimate restriction of religious freedom and infringement of the autonomy of the institutions of the Christian community. It is a violation of the integrity of Christian faith as it will lead to an imposition of Islamic religious beliefs on its sacred Bible. END_OF_DOCUMENT_TOKEN_TO_BE_REPLACED

Sabah and Sarawak leaders: Reject Hadi’s Bill – The Star Online 8 May 2017 Prominent lea­ders in Sabah and Sarawak have refuted claims that amendments to the Syariah Courts (Criminal Juris­diction) Act, or RUU355, will not affect non-Malays and Muslims in the two states. Writing in an open letter, they urged the people to preserve … END_OF_DOCUMENT_TOKEN_TO_BE_REPLACED

Prominent lea­ders in Sabah and Sarawak have refuted claims that amendments to the Syariah Courts (Criminal Juris­diction) Act, or RUU355, will not affect non-Malays and Muslims in the two states.

Writing in an open letter, they urged the people to preserve the country as a secular state and to reject Datuk Seri Abdul Hadi Awang’s Private Member’s Bill to amend RUU355. The letter, signed by 20 leaders including politicians, former civil servants and the G25 group of eminent Malays, was made available in four languages – English, Malay, Kadazandusun and Iban.

Malaysia, they said, was founded together with Sabah and Sarawak as a secular federation, in which Islam as the “religion of the federation” only played a ceremonial role.
“Lest we forget, religious freedom was stressed and assured in the merger negotiations of Malaysia. Hudud punishments were never placed on the agenda. “Had hudud punishments been on the cards, the Malaysia project would have likely been rejected by the peoples of Sabah and Sarawak,” they added.

Introducing hudud, they warned, would breach both the Malaysia Agreement 1963 and the Federal Constitution…“Together with the dispropor­tionality of the offences and punishments, the introduction of these three hudud punishments (in Kelan­tan and Terengganu) will qualitatively alter the secular nature of the legal system,” they said. Sabahan and Sarawakian Muslims working and living in Peninsular Malaysia would also be subjected to hudud, they added…

“For Malaysia’s sake and to preserve our country as a secular fe­­deration, we must say no to Bill 355,” they said.

FULL STATEMENT  GIVEN BELOW: