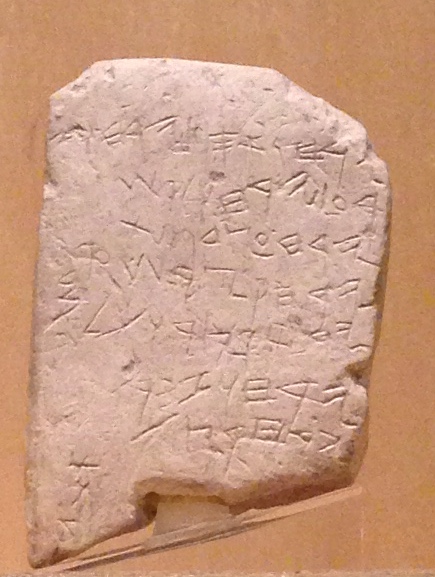 [This summary of major points contains spoilers]
Link to the Full Article: How to Misread the Bible in the Name of Paleo-Hebrew 3

Link to Introduction which sets the context: How to Misread the Bible in the Name of Paleo-Hebrew 1

The Paleo-Hebrew phenomenon involves a method of reading Hebrew words based on the assumption that, unlike the letters of other alphabets, the letters of the Hebrew alphabet represent not only sound but also meaning. Hebrew words then have “deeper meanings” missed by even Hebrew scholars who do not use this method in reading the Hebrew Bible.

For instance, consider the word

(Aleph-Bet, ’āb), which means “father” when read based on the sound of the word indicated by the letters (the ordinary way of reading it). But according to the Paleo-Hebrew method, this word has a deeper meaning when read based on the meaning each letter supposedly represents: Aleph (= “strength/leader”) + Bet (= “house”). In other words the “father” (ordinary meaning) is the “strength or leader of the house” (deeper meaning).

If the Paleo-Hebrew assumption is true, Biblical Hebrew is unlike any other language of the world, whether ancient or modern. This is in fact a claim made by a prominent practitioner of the Paleo-Hebrew method who has written a Study Bible based on this method. And if the method is valid, it will change significantly how we understand not only the Old Testament but also the New Testament.

A graphic demonstration of how the letters of an alphabet actually work to form written words to represent the respective spoken words shows starkly that if the assumption is true, Biblical Hebrew has somehow managed to overcome what is linguistically impossible with an alphabetic writing system—that the letters can somehow represent not only sound but also meaning.

So does the Paleo-Hebrew method actually work when tested against the available evidence? It seems to work in the selected Hebrew words presented by practitioners, which have impressed an increasing number of Bible believers. But we get a different impression when two different Hebrew words which share the same letters written in the same order are taken into consideration.

Also, there exists a Moabite inscription which recounts in the Moabite language a historical event that is also recorded in the Hebrew Bible, but each from a different perspective. When the two accounts are compared linguistically, the validity of the Paleo-Hebrew method seems to suffer a major set-back. Even the supposed uniqueness of “Biblical Paleo-Hebrew” and thus the applicability of the Paleo-Hebrew method to only the Hebrew Bible become questionable.

How the Paleo-Hebrew phenomenon can affect our reading and understanding of the New Testament is illustrated in the re-reading of Jesus’ words in Revelation, “I am the Alpha and the Omega,” as “I am the Aleph and the Tav.” Riding on the Paleo-Hebrew phenomenon, it has been claimed that because Aleph + Tav = Jesus, we are to see Jesus in the Hebrew particle Aleph-Tav, which occurs 7373 times in 5701 verses of the Hebrew Bible [checked using Logos Bible Software and BibleWorks].

However, it is questionable that we can transpose the (figurative) meaning of “the Aleph and the Tav” out of the context of Revelation into the respective contexts of the Old Testament texts. In the context they are used, since Aleph is the first (beginning) letter and Tav is the last (end) letter of the Hebrew alphabet, they are here clearly used figuratively (as metaphors to be exact) to mean “the First and the Last” (Revelation 1:17; 2:8; cf. Isaiah 44:6) or “the Beginning and the End” (Revelation 21:6; 22:13). For this reason Jesus is He “who is and who was and who is to come, the Almighty” (Revelation 1:8). Since it is the order, and not any supposed meaning, of the letters in the alphabet that provides the figurative meaning, it really makes no difference if Jesus had said “I am the Alpha and the Omega” or “I am the A and the Z.” Just as A (or Alpha) and Z (or Omega) convey the desired figurative meaning without having any inherent meaning in themselves, so Aleph and Tav can do the same without having any supposed inherent meaning in themselves.

In conclusion, when we are impressed by the Paleo-Hebrew method because we can see many Hebrew words yield exciting “deeper meanings” by using it, we need to bear in mind that to every example where this method seems to work there are multiple counter-examples that clearly show that this method does not work.

*Dr Leong Tien Fock has been studying the relevance of the Old Testament to the Church and the world for over 20 years. This has culminated in his recent book entitled Our Reason for Hope: An Exposition of the Old Testament on the Meaning of History. He has a degree in Civil Engineering from the University of Malaya and an M.A. in Old Testament Studies from Wheaton College Graduate School. His masters’ thesis is on the interpretation of Ecclesiastes entitled The Realism of Ecclesiastes. He also has an M.A. and a Ph.D. in (ancient) Near Eastern Languages and Cultures from the University of California, Los Angeles. His Ph.D thesis, entitled Tense, Mood and Aspect in Old Babylonian, is a computer-assisted linguistic analysis of the language of Hammurabi.

BONUS: You may download free copies of two books written by Dr. Leong Tien Fock at the links given below:

Our Reason for Hope [pdf]

Related Links:
For a video where Dr. Michael Brown presents a scholarly and comprehensive refutation of the claims of Paleo Hebrew:
The Real Truth About the Paleo Hebrew Script