Kitab Salat as-Sawai (1514) was the First Printed Arabic  (Not Jawi Malay) Book The Error In one of my earlier posts, I mentioned that the earliest Malay printed prayer book was the Kitab Salat as-Sawai which was printed in 1514. I was wrong. Why? I was relying on two sources with reputable academic credentials. The … END_OF_DOCUMENT_TOKEN_TO_BE_REPLACED

The Error
In one of my earlier posts, I mentioned that the earliest Malay printed prayer book was the Kitab Salat as-Sawai which was printed in 1514. I was wrong. Why?

I was relying on two sources with reputable academic credentials. The Kitab Salat as -Sawai was listed in the archives section of the International Association of Missions Studies Website (http://www.missionstudies.org/).  It says,

“The earliest writing by Christians of the ‘modern’ period in ‘Malaya’ may be the Kitab salat as-sawai (Christian prayers) of Gregorio de Gregorus, printed in Arabic type in 1514.  (Published in Fano, Italy, a copy is held in the British Museum – Gallop 1990, 86f.)  Gregorus apparently worked for a time in Melaka (Malacca).”

Interestingly, this page is now no longer accessible online.

More importantly, I was relying on research work done by Dr. Syed Muhd Kairudin Aljinied from National University of Singapore which was published in the book, Raffles and Religion: A Study of Sir Thomas Stamford Raffles’ Discourse on Religions amongst Malays (Kuala Lumpur: The Other Press, 2004): pp. 72-73. It says,
“The earliest known Christian related writing in Malay was Kitab Salat As-Sawai (Christian prayers) by Gregorio de Gregorius. This book of prayers was printed in Jawi (published in Fano in 1514) (Gallop 1994, 86). De Gregorius apparently worked for some time in Malacca as a Christian missionary… in 1599, Frederick de Houtman compiled the first Dutch-Malay dictionary and also Malay translations of Christian prayers while serving his term in an Achenese prison…In 1740, a complete ‘Malay Bible’ was circulated.”

The source of Error
I double checked the original article written by Annabel Teh Gallop, published by Journal of the Malaysian Branch of the Royal Asiatic Society JMBRAS vol 53, part 1 (1990), pp. 85-124 which says,

“…it appears from Marshall’s account that printing of Malay into the jawi script was carried out in Holland prior to 1677, for he writes: “the Dutch (we hear) have lately formed such Types, and therewith printed a Catechism into the Malayan language and characters… Such an undertaking seems plausible, for as early as 1514 the first extant book to be printed in Arabic types – a book of Christian prayers entitled Kitab salat as-sawa‘i  – had been published in Italy by Gregoria de Gregoriss.”
It is easy to conclude from this passage that the Kitab Salat was printed in jawi Malay and the temptation to read it as such is easy since the title of the article itself is “Early Malay Writing.” But a closer reading of the passage says it is printed in Arabic types – at best it suggests only a possibility of early jawi Malay texts as a possibility prior to 1677.  So to conclude that the Kitab Salat was printed in jawi in 1514 is unwarranted.

Conclusive evidence is available if one is able to read a copy of the Kitab Salat itself. It is good that I managed to trace a report written by Philip Hitti who confirms that the Kitab  Salat is indeed written in Arabic and not Jawi Malay.
I attach the follow excerpts (along with photos taken from the Kitab Salat) for your reference.

Source: Philip R. Hitti. The First Book Printed in Arabic [nkw: note we are talking about printed type and not hand-written copies,] 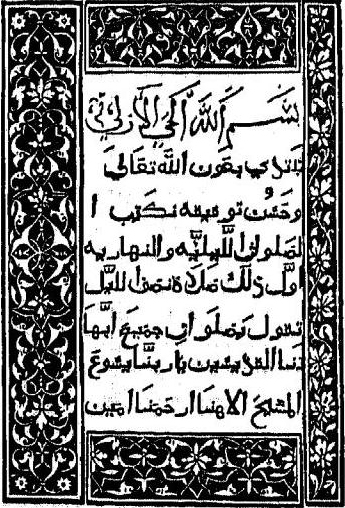 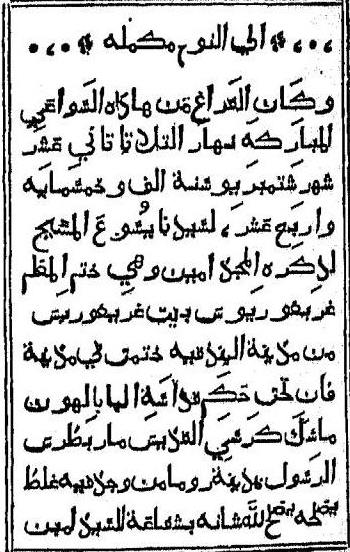 The Actual Text
A book of Hours, printed in Arabic in Fano, Italy, in 1514 by a press subsidized by Pope Julius II has come into the possession of the Library… That book was intended to attract adherents of Islam is clear by the opening lies of the various sections which imitate the beginnings of the sections of the Koran, “In the name of God, the Ever-living, the Eternal,” etc. If it were translated into Turkish, it might well be connected with the overtures made by Pope Julius to the Turks shortly before his death, but the Arabic text would seem to preclude that supposition.

Into the safekeeping of the Treasure Room of Princeton University Library there has recently passed a small unpretentious skin-bound book that represents the first attempt ever made at printing Arabic form movable type. Its title Kitab Salat al-Sawai (literally, the book of the prayer of the hours). Its date of printing is September 12, 1514 and the place Fano, Italy.

The book consists of 120 leaves in octavo, all extremely well preserved. The text is in black ink but the rubrics and punctuation marks in red; 12 lines per page. Nine pages have decorative woodcut borders, five of which are white on black, consisting of lines and geometrical figures imitating flowers and leaves and following the pattern of illuminated borders in Korans and other Oriental manuscripts. These borders constitute one of the earliest appearances in print of such motifs and ornamental designs, generally termed “arabesque” or “Moresque.” Four borders carry varied patterns also arabesque but with aquatic and aerial birds, indicating influence from European ornamental designs of and following the period of the Renaissance.

The first page translated into English reads:
In the name of God, the Ever-living, the Eternal.
We begin with the aid of God, be He exalted.
And by His gracious favor, to write
the nocturnal and day prayers.
First among them is the midnight prayer.
Thou shalt say: Through the supplications of our
fathers the holy men, O our Lord Jesus
Christ our God, have mercy upon us. Amen
The colophon says:
The completion of this blessed Book of Hours
took place on Tuesday, the twelfth of
September, in the year of our Lord Jesus Christ,
glory to his name! Amen. It was printed by the master
Gregorius of the house of Gregorius
of the city of Venice. Dome in the city of
Fano [Fan] during the reign of His Holiness Pope Leo.
the occupant of the chair of Saint Peter
the Apostle in the city of Rome. He who finds error in it
let him rectify it, and God will rectify his affairs
through the intercession of the Lord, Amen.

Our copy bears some interesting handwritten glosses and marginal notes, mostly contemporary. The tile page carries a manuscript title in Latin: “Horologium e Graeco sermone in Arabicum translatum.” Below it a later Latin ownership inscription, probably eighteenth century, names the Augustine Eremite Convent at Munich. Other Latin notations on the margin render the Arabic captions. The collation of the forms of the book was marked in Syriac and Arabic by some hand, an Oriental one. Could it be the hand of the typesetter, some Christian immigrant from Lebanon, or was it the hand of a reader, one of those Maronite Lebanese scholars who in the sixteenth and seventeenth centuries labored in Rome introducing and popularizing Oriental studies? To the inside cover is attached the bookplate of Jacob Manzoni: “Ex Libris Jacobj Manzoni,” with his coat of arms. Manzoni was a bibliophile, scion of an aristocratic family of Milan. He died in 1889; his library was sold 1892-4. Finally this item in it found its way, through an auction sale in England last winter, into the hands of a London bookdealer, Goldschmidt, from whom Princeton acquired it by purchase. Here ends the story of our copy.

I hope this new information clears the confusion.