RELATED POST: Shariah Law has no Consequences on Non-Muslims? HUMBUG RELATED POST: MCCBCHST: WE REJECT THE PRIVATE MEMBERS BILL ON HUDUD ** Note to the reader. There will be some amendments to Hadi’s bill as it goes through the various readings in Parliament. Supporters of Hadi’s bill will then claim that the statement of MCCBCHST’s … END_OF_DOCUMENT_TOKEN_TO_BE_REPLACED

RELATED POST: Shariah Law has no Consequences on Non-Muslims? HUMBUG

** Note to the reader. There will be some amendments to Hadi’s bill as it goes through the various readings in Parliament. Supporters of Hadi’s bill will then claim that the statement of MCCBCHST’s is no longer relevant. We disagree!

In any case, the statement is shared as documentation about the baseline or ultimate goal of the Islamic Hudud agenda which will be “implemented in phases”. The statement also reminds us the hudud context even as the next stage will be on explaining why the bill with the new amendments is still unacceptable.

** Call your MPs to make sure they vote against Hadi’s Bill (UMNO Assisted).

The Malaysian Counsultative Council of Buddhism, Christianity, Hinduism, Sikhism and Taosim (MCCBCHST) is gravely concerned with Hadi’s Private Members Bill which will be coming up for debate soon in our Federal Parliament. As the Bill will have far –reaching consequences for the Nation, the MCCBCHST feels duty bound to issue this open letter to Members of Parliament to do their duty as required by their oath of office to protect our Federal Constitution.

Excerpts from the 8-page MCCBCHST Open Letter to MPs
I. Is HADI’s Private Member’s Bill a Bill empowering HUDUD offences?
The answer is a clear ‘YES”. Here it is why…

The proposed new Section 2A is very wide and states that Syariah Courts can impose punishments which are allowed by Syariah Law in relation to punishments which are listed under the above Section, other than the death penalty.
Now, let us look at the Syariah Law Enactment passed by the State Legislature of Kelantan, known as the “Kelantan Syariah Criminal Code 11 (1993) 2015”. The offences included in this Kelantan Enactment are:
(i) HUDUD (fixed punishments). The offences included are theft, robbery, adultery, false accusation of adultery, sodomy, intoxication, heresay (these are ll Hudud Offences).
(ii) Qisas (retaliatory) – punishments for homicide and causing bodily injuries (these are “qisas offences”).
(iii) Ta’zir (discretionary) punishments imposed when hudud or qisas punishments cannot be meted out.
Thus if, HADI’s Bill is passed by Parliament, would allow the Kelantan Syariah Criminal Code 11 (1993) 2015 to be implemented and to impose HUDUD punishments of theft, robbery, adultery, sodomy, etc.
**Thus, the proposed HADI’s Private Members Bill is clearly a HUDUD BILL as it seeks to empower States to be able to introduce amendments empowering Syariah Courts to impose HUDUD Punishments…

These are the reasons why, Hadi’s Bill, if passed will have serious consequences to the Nation and to the Non-Muslim position:
(i) The Kelantan Syariah Enactment Bill passed in 1995 as amended had by Section 56(2) of the Enactment given option to Non-Muslims to come under its Jurisdiction. This option is clear violation of the Constitution, which has declared in List II Schedule 9 that Syariah Courts have jurisdiction only on Muslims.
(ii) A paper prepared by the Jakim Syariah Civil Technical Committee dated May 8, 2014 had proposed Hudud to be implemented in 2 stages, the first involving amendments to Federal and State Laws.
In the second stage it will include education and promotion of the Hudud implementation and would then apply to NonMuslims [See Malaysia today “Hudud should apply to all Malaysians – Jakim paper suggests dated 6/9/2014].
Hadi’s Bill, thus appears to be the first stage.

(iii) Hadi’s Bill is indeed empowerment of Hudud offences.
The Aim of the Bill is to empower States like Kelantan to be able to impose Hudud punishments. Thus it is clearly a Hudud offences Bill

MCCBCHST call upon all Members of Parliament to attend Parliament and Help defend the Constitution by vigourously opposing Hadi’s Bill and voting against it. This is what the Nation Expects of You. 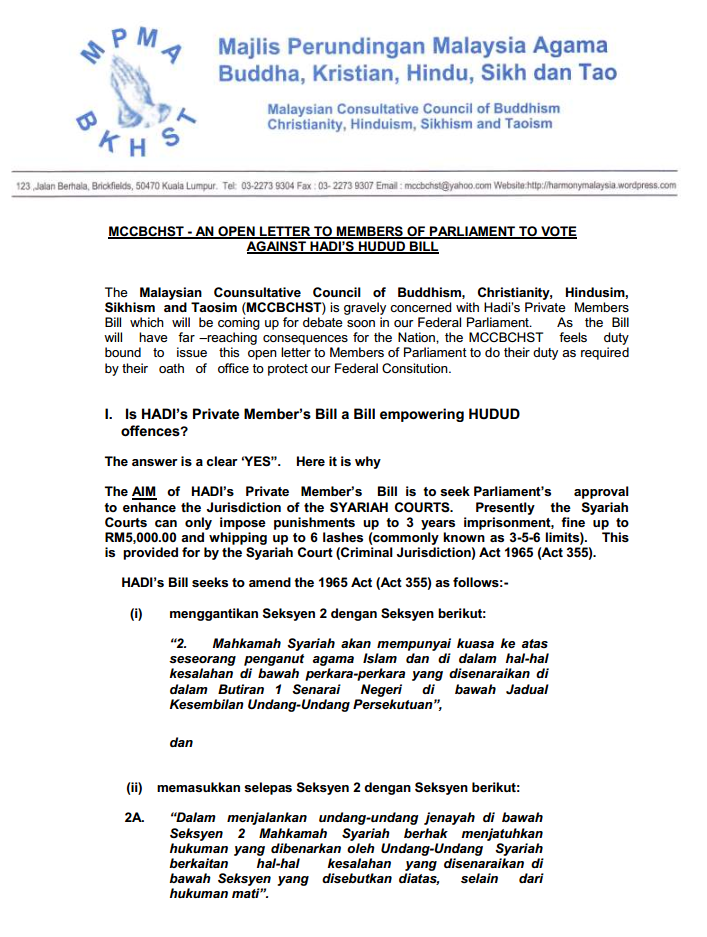 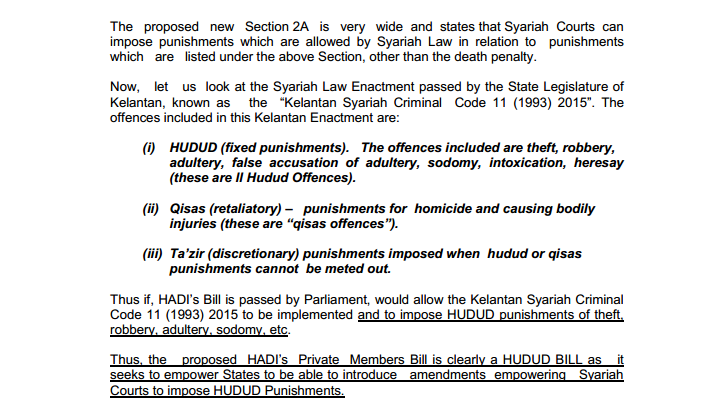 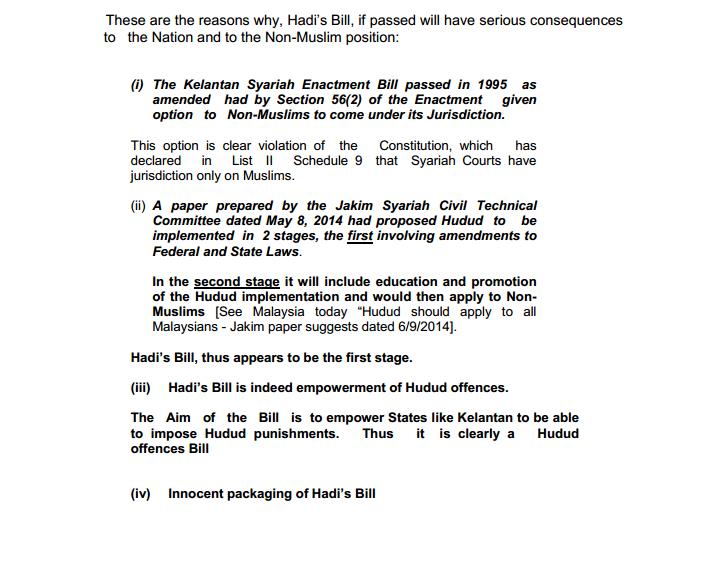 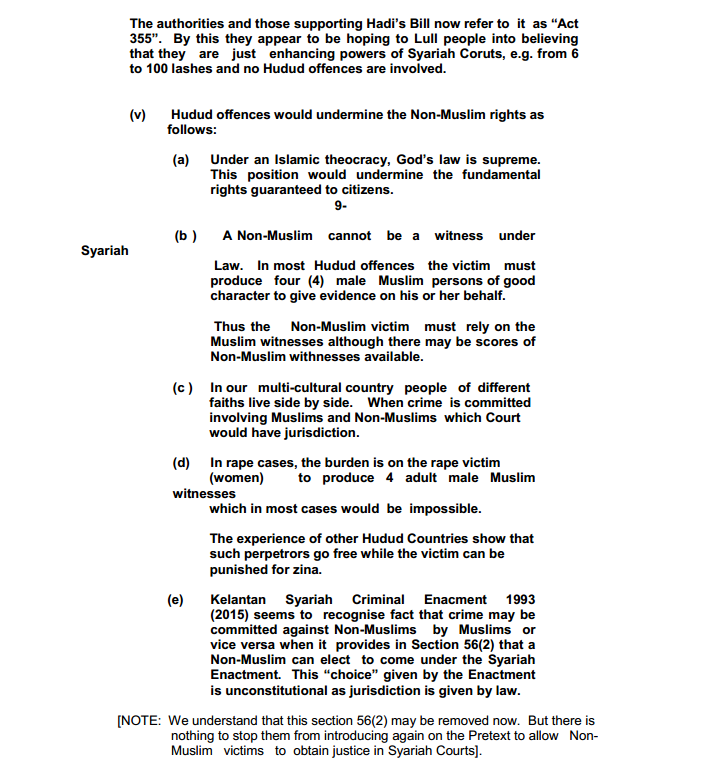 To download the full document in PDF format (8 pages)

RELATED POST: Shariah Law has no Consequences on Non-Muslims? HUMBUG