In response to many requests, I am posting the print edition of an article written when I was much younger, “Pluralism and the Particularity of Salvation in Christ,” Transformation (1998), pp. 10-15. Ah, how time flies and I don’t seem to have grown wiser. To download the pdf version of this print edition: Pluralism Particularity … END_OF_DOCUMENT_TOKEN_TO_BE_REPLACED

In response to many requests, I am posting the print edition of an article written when I was much younger, “Pluralism and the Particularity of Salvation in Christ,” Transformation (1998), pp. 10-15. Ah, how time flies and I don’t seem to have grown wiser.

To download the pdf version of this print edition:

…But why should God need to intervene in the human predicament in the first place? How does the Christian teaching of the Incarnation of Christ fit in? Following White I would like to propose the “Criterion of Moral Authenticity” as a means to shed light on this issue. To begin with, estrangement between God and man is overcome not by special knowledge but by a demonstration of perfect love. Given the magnitude of the human predicament, surely such a revelation demands a costly love which does not compromise God’s holiness. It has to be costly love to win over human sin and rebelliousness. But as White asserts, “Unless and until God himself has experienced suffering, death, and the temptation to sin, and overcome them, as a human individual, he has no moral authority to overcome them in and with the rest of humanity.”[Vernon White, Atonement and Incarnation (CUP 1991), p. 38]

Our sense of justice demands that unless God has taken upon himself the sufferings of his creatures, he does not understand, much less be able to address, our plight. It is important that his involvement with us goes beyond mere awareness or sympathy. He has to be on our side as a fellow-sufferer who truly understands because he has experienced what we are going through. It is out of such moral considerations that we are able to appreciate the full dimension of the Incarnation which finds its fulfillment on the cross where Jesus died in sacrificial love for us. Certainly no other God has acted so decisively and given proof of his moral credibility.

It is clear that the Christian understanding of divine intervention as creative atonement is an immensely profound teaching. It also better explains how personal revelation can attain universal efficacy. After all, if knowledge is the only necessity, God only needs to reveal himself by inspiring prophets who will deliver his message. The logic of divine intervention also suggests that the divine agent will work personally through a particular historical instance which will eventually attain universal redeeming possibilities. By the same token, the divine intervention must achieve its universal goal under the same limitations.

However, such a transformation has to take place under the limitations of human conditions if it is to be authentic. More importantly, sinners who are reconciled must be active and willing participants. For this reason, Jesus through his incarnational experience became fitted to relate effectively with those he came to save. God in Christ having taken such relationships into his own experience attains universal significance because he has the moral authority and spiritual capacity to influence fellow-men everywhere without overwhelming their personal freedom. Vernon White succinctly explains how the particular intervention of Christ makes universal salvation possible.

God in Jesus consistently and perfectly did the very thing which must happen in all of us: he died to self and lived to God. He does this as an individual human being under the normal conditions of a finite, fallen world, ‘learning’ faith as a fragile mortal. Having done this as an individual (entailing historical particularity), his spirit (transcending spatial and temporal particularity), having access to all time and space can relate that achievement to every other individual. Because the spirit of Christ which is in and with us, potentially and actually, in time and eternity, is the ‘experienced’ spirit of the perfected man Jesus, the possibility of our ultimate perfection is established.[White, Ibid., pp. 54-55]

We should note the unexpressed assumption of the religious pluralist that any claim of the historical particularity of the incarnation and uniqueness of Christ’s salvation can only lead to insularity and exclusivity. It should be clear that this assumption is questionable. We may even argue that the pluralist’s presupposition of an individualistic and hence its focus on self-transformation and ‘saving’ insight is a departure from historic Christianity.

To download the pdf version of this print edition: 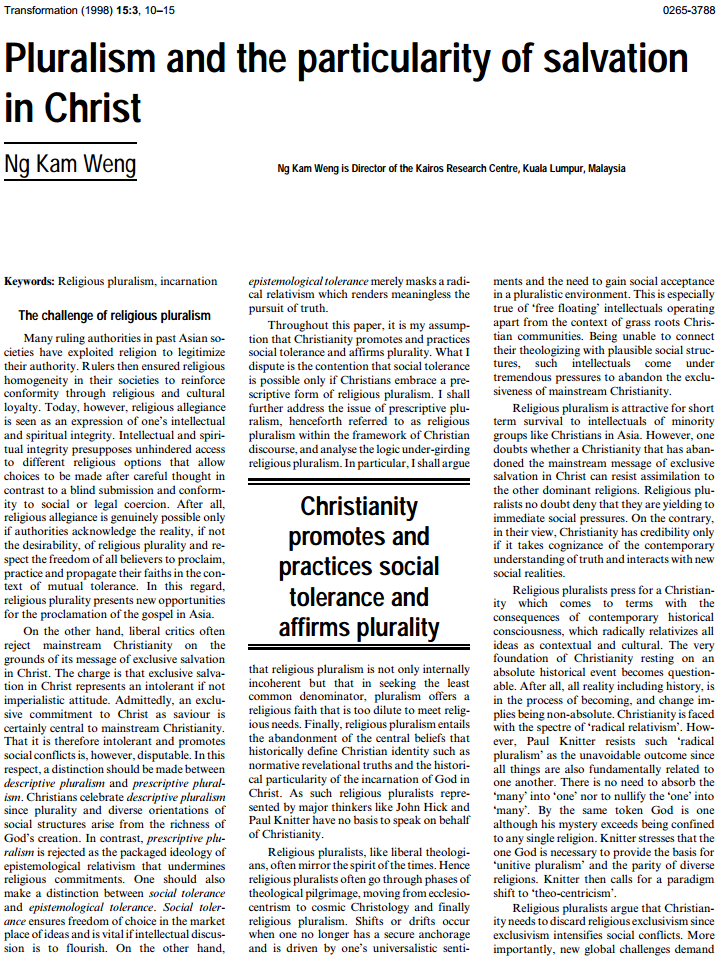