The two main rivals of the doctrine of providence are deism and pantheism: (1) Deism envisages God leaving creation alone, having endowed it with inherent powers to operate according to its inbuilt laws. (2) Pantheism does not distinguish God from the world. Since God’s action or providence are identical with the course of nature, there … END_OF_DOCUMENT_TOKEN_TO_BE_REPLACED

The two main rivals of the doctrine of providence are deism and pantheism:
(1) Deism envisages God leaving creation alone, having endowed it with inherent powers to operate according to its inbuilt laws.
(2) Pantheism does not distinguish God from the world. Since God’s action or providence are identical with the course of nature, there is no independent or secondary causes in the outworking of creation.

[I am leaving out the philosophical theory of occasionalism, represented by Al-Ghazali (Muslim) and Malebranche (Christian) to keep the post simple, and so as not to burden some of my readers who may problems following complicated philosophical discussions. Occasionalism teaches that created beings are absolutely devoid of causal powers and all events are directly caused by God. God is directly, immediately and solely responsible for bringing about all phenomena.]

The Westminster Confession of Faith (WCF) strikes a balance between these two rival positions in its article on the decrees of God.

God, from all eternity, did—by the most wise and holy counsel of his own will—freely and unchangeably ordain whatever comes to pass. Yet he ordered all things in such a way that he is not the author of sin, nor does he force his creatures to act against their wills; neither is the liberty or contingency of second causes taken away, but rather established. (WCF 3:1)

This article on God’s decrees serves refutes both deism and pantheism: (1) Contrary to deism, nature does not work by its inherent power. God is immediately operative in every created being. (2) Contrary to pantheism, secondary causes or the action displayed by created beings are real even though they are ultimately dependent on God, who is the primary and self-sufficient cause.

Louis Berkhof echoes the WCF with his concise definition, “Providence may be defined that continued exercise of the divine energy whereby the Creator preserves all His creatures, is operative in all that comes to pass in the world, and directs all things to their appointed end.” [Louis Berkhof, Systematic Theology (Eerdmans, 1949), p. 166.]

We may identify several elements of providence which include, preservation (upholding the being of creation), concurrence or cooperation (God’s superintending human activity), and government (God’s guidance of all things). While the three elements in providence are distinguished, they are never separated in the work of God.

Models of Divine-Human Action in Providence
Empirical science studies the activity of secondary causes in nature which it describes with elegant mathematical equations. But the elegant equations by themselves are nothing more than inert abstractions. The mystery raised by Stephen Hawking remains unanswered, “What is it that breathes fire into the equations and makes a universe for them to describe?” Metaphysics and theology study divine action and its spiritual impact on the consciousness and the will of the human agent. Paul declared to the Athenian philosophers, “in him we live and have our being.” (Acts 17:28) The two perspectives of science and metaphysics complement one another.

It is precisely because the secondary causes are real that it is meaningful to speak about a concurrence or cooperation between God’s first (immediate) causes with secondary causes. It is divine power that sustains and guides all human action, but human actors remain free and responsible for their action. In concurrence, every action is entirely an act of the creature and an act of God.

But what is the relationship between divine and human action? This question has occupied theologians for centuries. The Jesuits, followed by the Socinians and Arminians argued that the influence of God (the primary cause) on human action is only “general” or “indifferent”. God determines the basic nature and character of his creatures, but he does not determine the specific decisions and spontaneous actions of the human agent (the secondary cause).

However, the witness of Scripture is that God controls not only the general sequence of history and nature, but the smallest event that happens: from the fall of the sparrow to supernova explosion. God remains in control even when human agents act spontaneously according to their nature and tendency. To preserve this biblical teaching of divine sovereignty whereby God brings all things to pass and the freedom and responsibility of the human agent, Reformed theology proposes the model of concurrence: there is a “cooperation of the divine power with all subordinate powers, according to the pre-established laws of their operation, causing them to act and to act precisely as they do.” [Louis Berkhof, p. 171]

D. A. Carson explains how one may understand the relationship between divine and human action. [Divine Sovereignty and Human Responsibility: Biblical Perspective in Tension (John Knox Press, 1981), p. 211.] 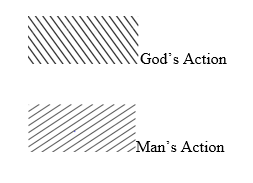 Libertarianism (Historic Arminianism)
Humans often act in contrary choice against God, who gives them freedom to do so.

Compatibilism (Historic Calvinists)
Humans choose and sin freely, yet God maintains control and uses even sin to accomplish his purposes.

Given below are several illustrations on the interaction between divine and human action taken from Randy Alcorn’s book, hand in Hand: The Beauty of God’s Sovereignty and Meaningful Human Choices (Multnomah, 2014), pp. 131-135.

[The illustrations are self-explanatory. However, I have some reservations about Alcorn’s definition of human freedom as selection between alternative choices (p. 135). Alcorn’s view shares an affinity with “liberty of indifference” which skews the discussion towards libertarianism. I prefer Jonathan Edward’s more realistic and biblical description of human action – our will always chooses according the most compelling motives and desires. We cannot act contrary to our prevailing motives or desires at the moment; we choose what we want. In short, there is no such thing as liberty of indifference in the selection of alternative choices.]

Extreme Libertarianism
[Creatures’ choices fall outside God’s control. Having granted freedom to human beings, God cannot know ahead of time and therefore does not control what choices free people will make.] 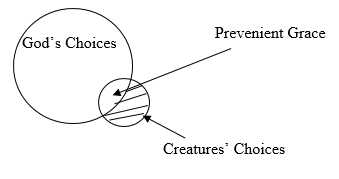 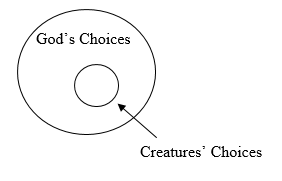 Compatibilism A shares similarities with Hyper-Calvinism 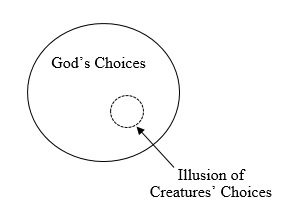 Compatibilism (B)
[Creatures’ choices that honor God are empowered by God’s choice to extend grace, while creatures’ choices to commit evil lie outside God’s direct choice. While God allows or permits evil, he does not cause it.] 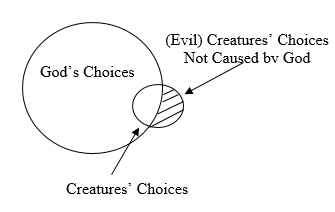 Compatibilism (C)
[Creatures’ choices still under God’s sovereign rule. He permits evil, but he uses their disobedience, if at all, to accomplish his plan.] 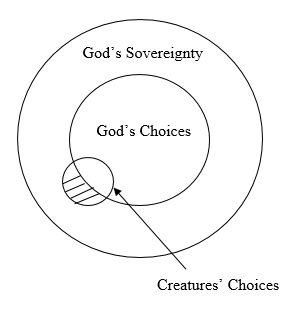 I prefer Compatibilism C: Evil results from the creatures’ choices. God does not cause evil; he merely permits the creatures to cause them. The reality of the creatures’ (wrong) choices do not constrain God’s sovereign control over all things (the unlimited circle of sovereignty).