The purpose of this post is to clarify the conceptual categories and the finely balanced relationship between necessity and contingency underlying the Reformed doctrine of meticulous providence and human freedom. I. Distinction between Natural and Free Causes Reformed Scholaticism frames the relation between God as the Creator and the world as his creation by using … END_OF_DOCUMENT_TOKEN_TO_BE_REPLACED

The purpose of this post is to clarify the conceptual categories and the finely balanced relationship between necessity and contingency underlying the Reformed doctrine of meticulous providence and human freedom.

I. Distinction between Natural and Free Causes
Reformed Scholaticism frames the relation between God as the Creator and the world as his creation by using ontological concepts like cause and effect. A further distinction is made between subjects with attributes of freedom (free causes) and subjects without that quality (natural causes).

A cause produces an act, and either the act or the state of affairs brought forward by the act is called the effect.

A natural cause is of such a nature that it could produce only one kind of act. Hence, it is called a necessary cause. Example, fire always burns and animals are driven by instincts.
A free cause is able to act variously at different times and structurally at one and the same moment. The effect of free causes are contingent or free.

The distinction between natural and free causes is given by how they “determine” their act. Determination means a cause gets directed to one effect. A natural cause is determined by its nature to act; a free act determines itself by freedom to one of possible acts.

Determination refers to the state of a cause; being undetermined means that the (free) cause has not yet directed itself to a certain effect. A determined cause will produce a determined effect, but the effect can be either contingent (determined by a free act) or necessary (determined by a natural act).

II. Concurrence between First and Secondary Causes
In terms of the relation between God and man, both were held to be free causes. God as the First Cause (prima causa) and creatures as secondary causes (secundae causae) concur together in their acting to produce a contingent effect. We should be aware that this causal terminology does not imply a manipulative, causal relationship: God as the Creator initiates, sustains, empowers and governs all that exists, while leaving room for the causal activity of his creatures. God does not only stand at the beginning, but is present to every moment of time in providing life, powers, and possibilities for action. It should further be noticed that in this relationship God is independent of his creatures, while these are dependent on God. The secondary causes are contingent themselves, so they are dependent in their existence on him. 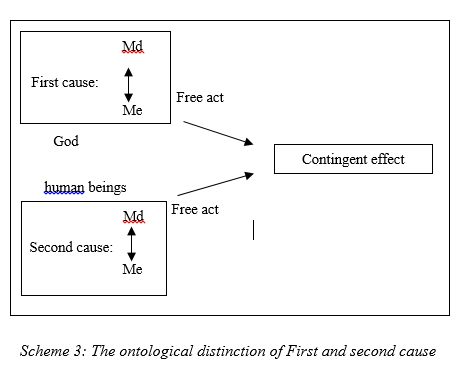 Although an exact answer to this question would require a separate study, the basic answer is that the divine choice for d is realized by the free choice of the second cause for it. So, the second cause keeps both possibilities, but is guided to choose by itself for d.

Each of the corners of this square has one modal term, and the lines between the corners indicate the possible relations between these options. It is important to note that for the sake of convenience we treat possibility and contingency as equivalents here. The relations between them are not as exclusive and simple as might seem at first sight. Logically, distinctions have to be made between contradictory, contrary, subcontrary and subaltern relations:

(7) If I marry Sophie, Sophie is my wife

This conditional assertion can logically be symbolized as:

In (8) we symbolize the conditional assertion of (7) by substituting its two parts by a letter (if p, then q) and substituting their implicative connection by the logical symbol for an implication (

). In this symbolized proposition, we call p the “antecedent” and q the “consequent” of the implication

. In Latin, the word for implication, or consequence, is consequentia. Now, if we add a necessity operator (N) to the implication, we can construct different formulas.

First, the implication itself can be necessary: if p, then q is always implied. Hence, the necessity operator is put in front of the whole implication:

So, the relation of implication itself is necessary. Yet, neither p nor q have to be necessary, because p and q can be perfectly contingent. Referring to the example: it is contingent that I marry Sophie (I did not have to do so…), and it is contingent that Sophie is my wife (she did not have to be mine…); but the implication between both is necessary: it cannot be the case that I marry Sophie but that she is not my wife.

[Put in historical context], Reformed theology was refuting the Remonstrants’ (Arminians’) logic of God’s knowledge (GKp) which entails the necessity of p (p being human action) or the denial of human freedom. Since for the Remonstrants human freedom is fundamental, they were forced to abandon God’s exhaustive foreknowledge: [K = knowledge operator],

If God foreknows p, p shall surely happen, and in that sense, it is not possible that it does not happen. Yet, Reformed theologians were eager to show that this kind of necessity can be united with the contingency of p. This would only be impossible if we ignore the distinction between the necessity of the consequent and the necessity of the consequence: in that case there would be no difference between both kinds of necessity and p would be necessary in every respect.

The same holds for God’s will. In contrast to the will of creatures, God’s will is always effective and is never frustrated. Again, [Taking W as will operator] the Reformed distinguish between

One final clarification has to be made about this analysis of necessity. This can be done by exploring the structure of an implication. If the antecedent would be necessary in the relation p q, then also the consequent itself has to be necessary:

In that way the necessity of the consequent would still obtain after all. Especially with regard to divine foreknowledge, which perceives things as they are, problems arose. Since the Church Fathers, the question was frequently debated whether God’s eternal knowledge is necessary and especially how God can know the so-called “future contingents” if his knowledge is determined. In this respect, Reformed theologians followed the medieval tradition of appealing to the pivotal function of the will: the divine will chooses freely, and its objects can be definitely chosen by it, without losing their contingency. So, their starting point was the proposition:

The application of the necessity of the consequence (with their belief in the effective will of God) shows in a nutshell the Reformed ontological convictions underlying their discussions of free choice:

In this ontology, the contingency of the effect can be united with a hypothetical necessity of the effect. Instead, the Remonstrant accusation of Stoic fate against the Reformed can only obtain if the divine will acts necessarily:

Yet, the Remonstrants would not accept that God’s will acts necessarily, so their accusation is void. Their objections against the Reformed insistence on both decisive divine involvement in human action and decisive human freedom could only be explained by these distinctions…the distinction between absolute necessity (simpliciter: necessitas consequentis) and relative necessity (secundum quid: necessitas consequentiae) enabled the Reformed scholastics to point out how necessity and contingency / freedom are in certain respects compatible instead of squarely contradictory.

Instead, the Remonstrants simplified the issue by their rejection of the distinction. If necessity and contingency are absolutely opposite, you are forced to be either a libertarian or a determinist. The Remonstrants were content to uphold human freedom and were convinced of Reformed determinism. Yet the Reformed rejected both options as a far too simplistic scheme. Their firm conviction that they were unjustly charged with determinism can only be understood by a detailed logical analysis.

So, a neglected of modal categories in theology runs the risk of falling back into either a necessitarian, determinist worldview or an unstable, arbitrary ontology of mere contingency. The Reformed maintained a refined balance of necessity and contingency.

**The above discussion is taken (with adaptations) from Reformed Thought on Freedom: The Concept of Free Choice in Early Modern Reformed Theology, ed. William van Asselt, Martin Bac and Roelf Velde (Baker 2010), pp. 30-38.

2 thoughts on “Divine Sovereignty and Human Freedom: Supplementary Reading on Necessary and Contingent Cause and Effect. Part 7(a)/7”