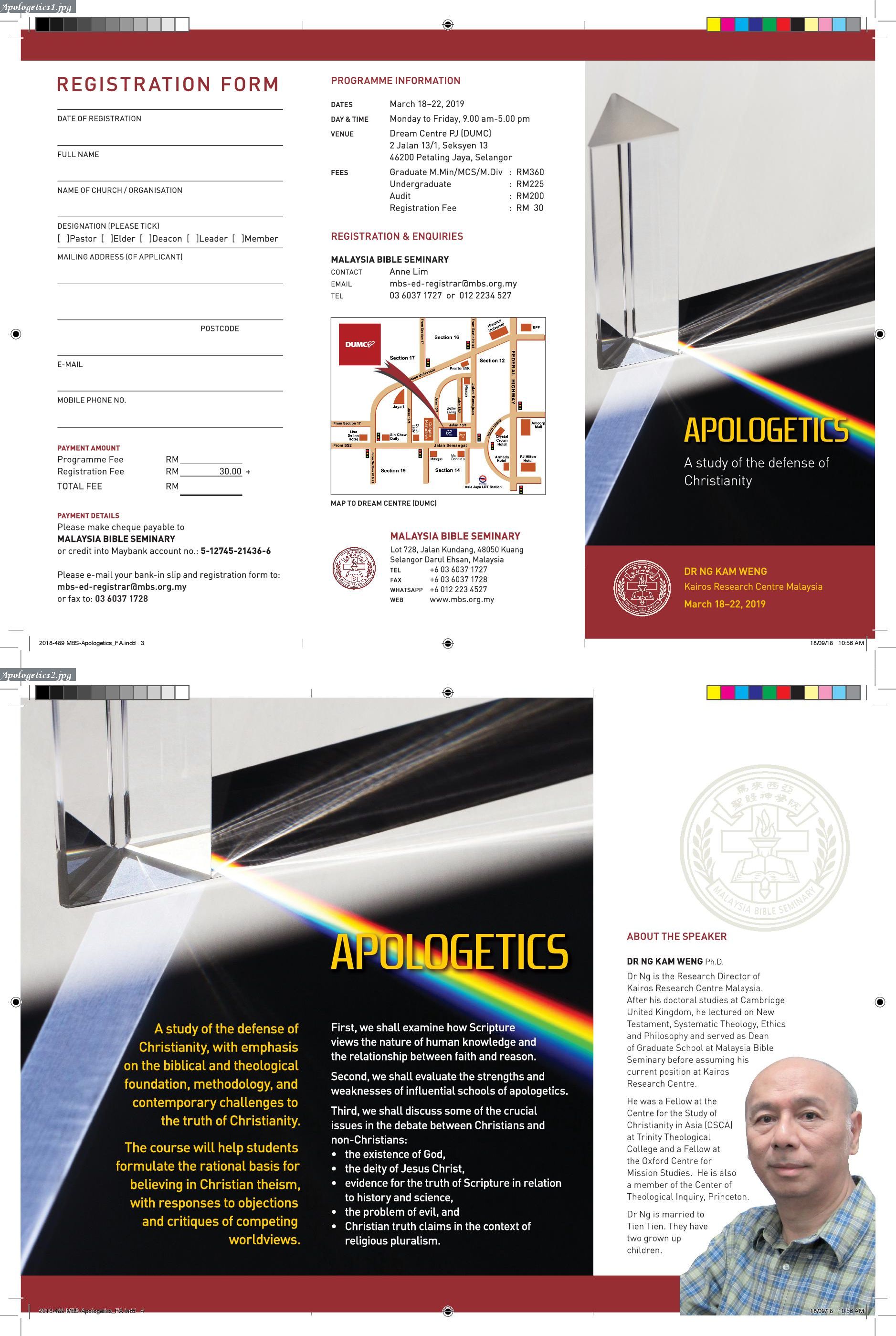 We may not pander to the intellectual arrogance of unbelievers, but we must cater to their intellectual integrity since the heart cannot delight in what the mind rejects as false. Apologetics is a form of respectful Christian witness that engages seriously with sincere objections and doubts about the truth claims of Christianity raised by the inquirer. Apologetics is premised on the conviction that the Holy Spirit will act upon the truth that is presented to bring about saving faith

I. COURSE DESCRIPTION
A study of the defense of Christianity, with emphasis on the biblical and theological foundations, methodology, and contemporary challenges to the truth of Christianity.

The course will help students formulate the rational basis for believing in Christian theism, with responses to objections and critiques of competing worldviews.
First, we shall examine how Scripture views the nature of human knowledge and the relationship between faith and reason.
Second, we shall evaluate the strengths and weaknesses of influential schools of apologetics.
Third, we shall discuss some of the crucial issues in the debate between Christians and non-Christians: the existence of God, the deity of Jesus Christ, evidence for the truth of Scripture in relation to history and science, the problem of evil, and Christian truth claims in the context of religious pluralism.

[We may not pander to the intellectual arrogance of unbelievers, but we must cater to their intellectual integrity since the heart cannot delight in what the mind rejects as false. Apologetics is a form of respectful Christian witness that engages seriously with sincere objections and doubts about the truth claims of Christianity raised by the inquirer. Apologetics is premised on the conviction that the Holy Spirit will act upon the truth that is presented to bring about saving faith]

The task of apologetics to demonstrate the truth of Christian revelation against attack
Christian apologetics is concerned with a defence of the truthfulness of the Christian religion. The task of theology is to define the content of revealed truth, while the task of apologetics is to defend its validity. Theology and apologetics are twin members of a common family. In our spiritual warfare, the one is defensive, the other offensive. The aim of apologetics is not to trick a person into becoming Christian against his will. It strives rather at laying the evidence for the Christian gospel before men in an intelligent fashion so that they can make a meaningful commitment under the convicting power of the Holy Spirit. The heart cannot delight in what the mind rejects as false. Apologetics presents compelling reasons to the mind for receiving Christ as Saviour into the total man. Faith is based upon credible evidence which people can recognize as trustworthy in accord with proper criteria for truth.

Modern man is confronted by a bewildering array of clues to the meaning of the universe. Choosing Christ to be his ultimate clue is not an arbitrary act of desperation, but an intelligent step of faith based on good and sufficient evidences. The aim of apologetics is to demonstrate the validity of the Christian system and defend it against attack.

The very essence of the good news is the claim that in Christ Jesus God openly showed Himself in the empirical realm of history, and on that basis He commands all men everywhere to repent (Jn 1:14; 1 Jn 1:1-3; Ac 17:31). The incarnation had a soteriological purpose – the name of Jesus, not the intuitive truths of reason, saves – and it had an epistemological purpose – the “unknown God” is no longer unknown. There are checking procedures for testing the Christian clue, and it is the task of apologetics to present the fruits of them cogently.

The Holy Spirit acts upon the truth of Christian revelation to bring about saving faith
Christian commitment does not take place in a vacuum. What modern unbelief needs is not less apologetics but more. Faith is not the opposite of knowledge. The scandal of the gospel is not its alleged immunity form proof. The gospel makes sense, not non-sense. Its offense lies in its moral unmasking of the sinner, not in its supposed uncertain truthfulness.

In salvation the Spirit creates the capacity for receiving God’s truth, but truth it is…Certainly the Bible teaches that the sinner is deaf, blind and dead to the claims of the gospel. But this does not absolve us of the responsibility to present truth which can save under the power of the Holy Spirit (cf. Eze 37:1-14). What saves is the Spirit acting upon the data to bring about saving faith.

The incarnation means that God has supplied data for His existence and character on which an intelligent faith commitment can be made. “The same works that I do bear witness of me, that the Father hath sent me,” said Jesus (Jn 5:36). The facts backing the Christian claim are not a special kind of religious fact. They are the cognitive, informational facts upon which all historical, legal and ordinary decisions are based. Confidence in the factual truth of the gospel is simply logical incarnationalism. The fact of Christ can be shared with men without apology.

Man has always been confronted by a cafeteria of clues to the meaning of the universe. His choice of the absolute ground of meaning, by which he orders the vast diversity of reality encountered, is a religious commitment. His problem is how to choose between the tempting alternatives. The discipline of Christian apologetics exists to assist him to see that the gospel of Jesus Christ is a live option; even more that it alone can verify its claims, deliver him from despair, and provide solid ground beneath his feet. [Clark Pinnock Set Forth Your Case. Moody Press, 1971]