Reposted here for easy access* The image of warfare between science and Christianity was invented by  Victorian scientific naturalists under the leadership of Thomas H. Huxley (otherwise known as Darwin’s bulldog). They believed that nature is a closed system of physical causes and that nature should be explained only with inviolable natural laws (as opposed … END_OF_DOCUMENT_TOKEN_TO_BE_REPLACED 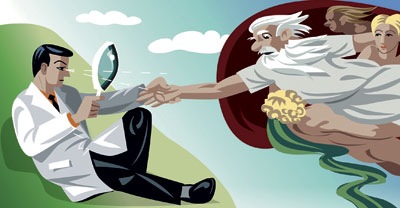 The image of warfare between science and Christianity was invented by  Victorian scientific naturalists under the leadership of Thomas H. Huxley (otherwise known as Darwin’s bulldog). They believed that nature is a closed system of physical causes and that nature should be explained only with inviolable natural laws (as opposed to supernatural laws or spiritual forces). Huxley and his cohorts concluded that the larger populace was receptive to their attacks against Christianity as there was growing resentment against the Church and parsons who had allied themselves with squires to exploit farmers.

They adopted a two-fold strategy in their campaign to overthrow the cultural dominance of Christianity by replacing Christian supernaturalism with scientific naturalism as the foundation for science and education in a secular society:

First, discredit the Established Anglican Church with an all-out onslaught on its intellectual pretensions. “Mother Nature” becomes a substitute for God. What was once understood as God’s laws has become nothing but the uniformity of nature. “Let science declare and open war and shortly savor the delights of total victory.” Dozens of books were published to rewrite the history of the relationship between science and Christianity. The campaign reached its apex in two famous works – J.P. Draper, History of the Conflict between Religion and Science (1875) and A.D. White, History of the Warfare of Science with Theology in Christendom (1895)./1/

Second, shift the strategy from attacking the Church to imitating and replacing it. Huxley was certainly echoing Jesus’ words when he called his fellow-scientists to “sit down before fact like a little child. He proclaimed a “New Reformation,” preached “lay sermons on scientific subjects,” imitated popular evangelists by organizing mass meetings for scientific lectures which were accompanied by hymns to creation. Sunday schools were replaced by Sunday Lecture Societies.

Effectively, science became a religion at it took on the mantle of the Church. The scientists assumed the new priesthood. Not surprisingly, Huxley regarded himself as a “bishop” of the “church scientific”. The sacralization of science [in conjunction with other sociological developments] would eventually pave the way for the secularization of education and society. [See Colin Russell, Cross-Currents: Interaction between Science & Faith (Eerdmans, 1985), pp. 188-196.]

/1/ Footnote: Draper and White [both Americans]  were not simply describing an ongoing war between theology and science, but rather they were endeavoring to induce people into imagining that there was one. In order to do this, they repeatedly made false claims that the church had opposed various scientific breakthroughs and developments. For example, Draper and White encoded into popular thinking the erroneous notion that Christian orthodoxy had insisted for centuries that the earth was flat. A standard version of this urban legend includes a tale claiming that Columbus’s expedition was opposed by church leaders on the grounds that it was based on the heretical notion that the earth was round. It has been so effectively disseminated that even Christians generally assume that it is true. See, Timothy Larson, “War is Over if You Want it. Beyond the Conflict of Faith and Science,” in  Perspectives on Science & Christian Faith (2008), p. 147.

*Originally published as historical postscript to the post- Is there a War between Science and Religion? – Science and Christianity: Part 1

Related Post:
Did the Medieval Church Teach that the Earth Was Flat?