Critical Integration From a Christian Perspective Our approach to integrating science and Christian faith should be characterized by intellectual integrity and passion. This does not imply that non-Christians do not share these qualities. I am only pointing out that Christians ought to display these qualities as a distinctive of their faith. Arthur Holmes explains, The … END_OF_DOCUMENT_TOKEN_TO_BE_REPLACED

Critical Integration From a Christian Perspective
Our approach to integrating science and Christian faith should be characterized by intellectual integrity and passion. This does not imply that non-Christians do not share these qualities. I am only pointing out that Christians ought to display these qualities as a distinctive of their faith. Arthur Holmes explains,

The Christian believes that in all that she does intellectually, socially or artistically, she is handling God’s creation and that is sacred. . . . The scholar’s love of truth becomes an expression of love of God, just as the citizen’s love of justice in society can be an expression of hunger for righteousness, and the artist’s love for the creative and the beautiful expresses love for the Creator” [Arthur Holmes, Idea of Christian College (Eerdmans, 1987), p. 48]

We should recognize that some disciplines may be less directly open to any specific ‘Christian’ approach, such as in mathematics and the physical sciences. Nevertheless, the attitude of the Christian should be an openness to the possibility of integration.

Integration demands that the Christian maintains a constant ethical valuation of his learning in the light of Biblical ethics. However, Christian integration of science and faith should go beyond general platitudes that cannot be tested or implemented as specific personal actions and social policies. The challenge for Christian integration is to generate theories that are worthwhile pursuing. In particular, Christian integration should suggest “middle theorems” (Robert Merton) and “middle axioms” ( J. H. Oldham) in social research. The latter guides the formulation of Christian strategies in areas of social life such as questions of the goal and quality of work, criteria for justice, education and social engineering.

There are six ways to relate science and Christianity: conflict, independence, complementation, dialogue, integration and transformation. [See Ian Barbour, Religion in an Age of Science: The Gifford Lectures, 1989–1991 (HarperSanFrancisco, 1990), ch. 1.]

2) Independence
In the independence model, science and Christianity exist independently of one another. The two enterprises are also autonomous as each has its own domain of inquiry and contrasting method to justify truth claims on its own terms. As such, there can be no meaningful interaction between science and Christianity. Ian Barbour concludes, “This separation into watertight compartments is motivated, not simply by the desire to avoid unnecessary conflicts, but also by the desire to be faithful to the distinctive character of each area of life and thought.”

3) Complementation
Christians of this school accept theology and other disciplines as different but relatively valid explanations of the same phenomenon. There is no need to force them into an artificial unity. But these descriptions are ranked according to a hierarchy of complexity and values. Richard Bube suggests that we rank the sciences upwards from physical, biological, anthropological/psychological, to sociological sciences and finally, theology. [The Human Quest: A New Look at Science and the Christian Faith (Word, 1971), p. 34]. The problem of this view is the polarization, if not dichotomization of the disciplines. Non-Christians may not be duly impressed. Who cares to look to the sky for divine revelation when we can construct the explanations by ourselves?

4) Dialogue
Dialogue involves indirect interaction that includes limits questions or ontological questions raised by science but not answered by the methods of science. The method and content of science and Christianity share important points of contact and correlations to be explored. Philosophers of science acknowledge that science is not pure objectivity. Scientific data is theory-laden, not theory-free; research is guided by creative conceptual models of reality that help us imagine what is not directly observable. Likewise, religious data drawn from Christian experience and interpretation of scripture are also laden with conceptual interpretation based on language models and metaphors. Both theologians and scientists employ the criteria of coherence, comprehensiveness and research fruitfulness in their inquiry. Finally, dialogue should explore the possible role of Christian epistemology and ethics in science and the effects of scientific knowledge on Christian doctrine and experience.

5) Integration
Barbour notes that there are three distinct versions of integration adopted by theologians: (1)Natural theology claims that the existence of God can be inferred from big bang cosmology and that from the evidences of design in nature, of which science has made us more aware. (2) A theology of nature, begins with religious experience and revelation and with the knowledge that we gain from science and then seeks to harmonize them. Scientific theories may affect the reformulation of certain doctrines, particularly the doctrines of creation and human nature. (3) A systematic synthesis, would seek to combine the most reliable data from science and religion whereby Christianity contributes a coherent worldview elaborated in a comprehensive metaphysics (Thomistic or Process philosophy). Obviously, integration is an ongoing process.

Exponents of integration attempt to incorporate academic findings insofar as they are seen as consistent with Scriptural teachings. These scholars aim at upholding together Christian and professional credentials. Unfortunately, there is a strong temptation to disregard the integrity of academic findings through a pick and choose method (“confirmation bias”). On the other hand, subjective misunderstanding of Scripture (eisegesis) is not uncommon when Biblical verses are bended to support claims that modern findings are indeed, though somewhat indirectly found in Scriptures.

6) Transformation
Kirk Farnsworth, a research psychologist, suggests that integration of science and Christianity should be critical and transformative. For example, critical integration should involve “a process of a scrutiny from a Christian perspective of psychological theory, research, and practice, and the underlying assumptions of each; and b) incorporation into one’s thinking of those psychological theories, research findings, and procedures for application that pass the test. Reinterpretation of research findings that are not consistent with a Christian world view into terms that are, so that they can be incorporated into one’s thinking”. The process may be re-expressed as “critique (and possible correction), comparison, and commitment.” Corresponding psychological and theological facts are a) critiqued for methodological-hermeneutical soundness and perhaps corrected through the regeneration and/or reanalysis of data, b) compared with each other for degrees of similarity, and c) committed to as truths in one’s own life [Kirk Farnsworth, Wholehearted Integration: Harmonizing Psychology and Christianity Through Word and Deed (Baker, 1985), pp. 72, 94]

Genuine Christian integration demands a Christian ethical response. Knowledge for the Christian goes beyond description to prescription. Concepts move to conviction and commitment to action. The dialectical process of mutual transformation of faith and knowledge emphasizes that integration is a conscious, active and purposeful process. A Christian’s quest for knowledge and education should not be reduced merely to an acquisition of bare information and technical skills. Truth is seen as multidimensional and demands personal valuation and decisions. [See the classic text by Michael Polanyi, Personal Knowledge (Uni. Chicago, 1974)] The deepening dimensions of knowledge is also aptly captured by Bernard Lonergan in his commandments for inquirers: Be attentive! Be intelligent! Be reasonable! Be responsible! [See Bernard Lonergan, Method In Theology (University of Toronto 1990)]

Knowledge involves humans as rational beings who are interested in accuracy of facts of experience and right relations between ideas. Valuation is entailed because beliefs are inseparable from values. Such valuation implies a transcendence over personal viewpoints based on judgments made in the light of one’s tradition or one’s community of faith. Action is called for in recognition of the human need to act in a framework that gives unity, direction and accountability in all that we do. This leads to the source and ultimate purpose of knowledge, namely, the Creator.

Valuation is fortunately not a lone individual decision. The Christian can rely on the accumulated insights of his religious tradition. Nancy Murphy in her stimulating book on science and theology suggests the following criteria for valuation: 1) agreement with apostolic witness, 2) production of a Christlike character in those affected, meaning specifically freedom from sin and manifestation of the fruits of the Spirit, and 3) unity within the community based on prayerful discussion. [Nancy Murphy, Theology in the Age of Scientific Reasoning (Cornell UP, 1990), p. 152)] We are back again to the communal context of integration of faith and learning.

Appendix:
Given below are three images that concisely summarize the process of integration (David Dye) and the epistemological implication of the Christian doctrine of Creation (Arthur Holmes) 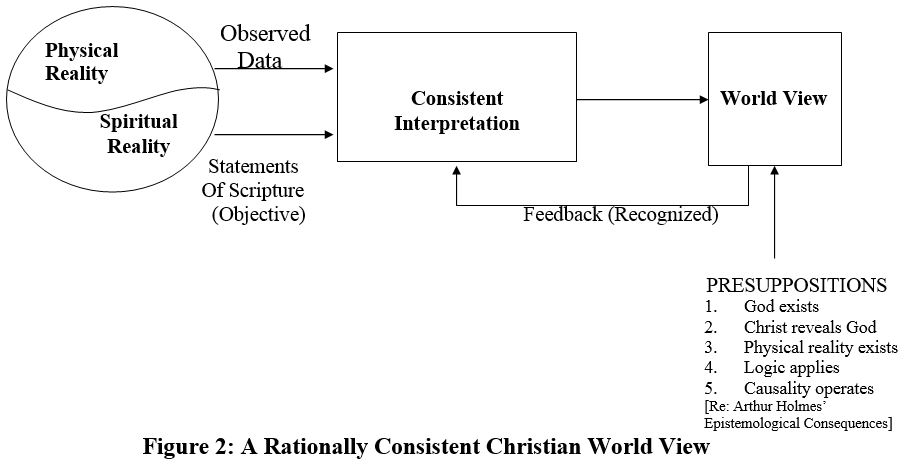 Related Posts on Science and Christianity. 6 Parts.
Part 1: Is there a War between Science and Religion?
Part 2: Christianity and the Rise of Modern Science.
Part 3: The Scope and Limits of Science: A Response to Scientism.
Part 4:Facing Up to the End of Science – Science & Christianity: Part 4/6
Part 6: Science and Theology as Analogous Research Programmes